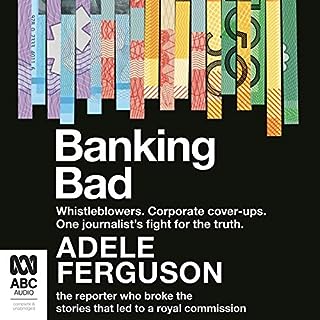 In Banking Bad, Adele Ferguson traces the origins of the banking scandal to the early 1990s, when buckets of money began pouring into compulsory superannuation funds, set up by Labor Treasurer Paul Keating. Attracted by the increasing cash, banks devised corrupt and questionable practices to get their hands on funds, along with aggressive selling practices that ignored due diligence, trust and honesty.

This is a great summary of the history and failures of the banking sector in Australia over the past four decades culminating in a Royal Commission which the author was instrumental in achieving. Well worth a listen for leaders in the banking sector, for those interested in what integrity really means, and for those in the broader community with responsibility for delivering essential community services.