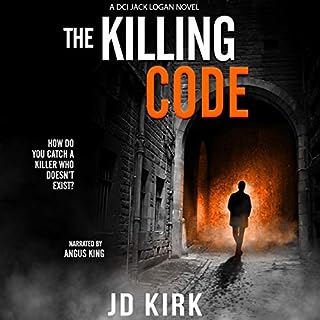 When a nurse is murdered on her way home from nightshift, Jack and his team go on the hunt for her killer. As more victims are uncovered, Jack finds himself tracking a murderer afflicted by a unique psychosis - one that leaves him free to maim and kill without a shred of remorse. Facing a new type of killer in an unfamiliar city, DCI Jack Logan is about to be pushed to his limits, before being forced to realize just how little he truly knows.

DCI Logan is everything you want your police officers to be - tough, gritty, but caring. I adore him and hope for more books in the series. Three is not enough.

The story is great, the characters compelling. And I love that Scottish accent. Wonderful narration. 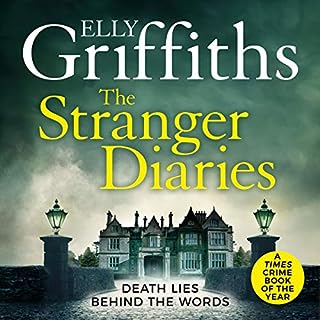 Clare Cassidy is no stranger to murder. As a literature teacher specialising in the Gothic writer R. M. Holland, she teaches a short course on it every year. Then Clare's life and work collide tragically when one of her colleagues is found dead, a line from an R. M. Holland story by her body. The investigating police detective is convinced the writer's works somehow hold the key to the case.s....

I liked the Ruth Galloway books, although the endless Ruth/Nelson situation got a bit tedious towards the end, so thought I would enjoy this book by the same author. That was a mistake.

The characters were for the most part unappealing. I really didn’t like the female police officer and would have been very anxious as a victim of crime if she’d been investigating my case. She and her partner bumbled along and really got almost nowhere. The voice of the narrator who read her part was irritating and her pronunciation was poor.

Georgie was a pain, and her mother not much better. The dog was the only truly likeable character.

The resolution to the mystery was so unlikely as to be almost laughable.

The Stranger story within a story was melodramatic and a bit silly.

I might have to give up on Elly Griffiths. 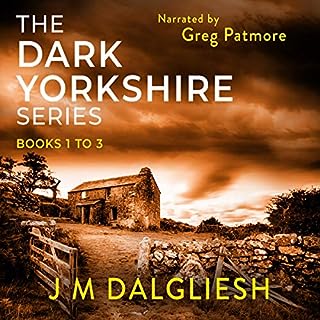 The Dark Yorkshire Series - fast-paced crime fiction stories featuring DI Nathaniel Caslin. The first three full-length books in this best-selling series are brought together for the first time in this great value set.

These titles are all brilliant. The writing is excellent, the characterisation couldn’t be bettered, and the narrator perfectly voices both characters and story. I adore DI Caslin. The environment of York and Yorkshire is a wonderful setting, brought to life beautifully for a reader who has only visited. I went from book to book and couldn’t stop listening to each. Just had to know what happened next. I’ve now read (listened to) all of the DI Caslin series, and hope there will be more. 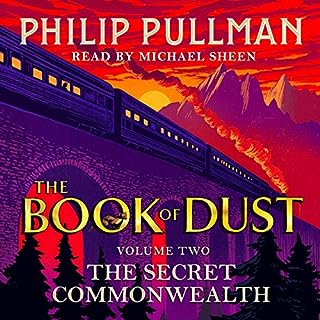 The second volume of Sir Philip Pullman’s The Book of Dust sees Lyra, now 20 years old, and her daemon Pantalaimon, forced to navigate their relationship in a way they could never have imagined, and drawn into the complex and dangerous factions of a world that they had no idea existed. Pulled along on his own journey too is Malcolm: once a boy with a boat and a mission to save a baby from the flood, now a man with a strong sense of duty and a desire to do what is right.

Another brilliant instalment in the Lyra story

Although I wasn’t keen on the narration - much better done in the Dark Materials books - the story is wonderful, and I sped through it breathless to know the outcome. All of the magic of Lyra’s world is there, and the drama of the story continues to engage. I am now waiting eagerly for Book 3. 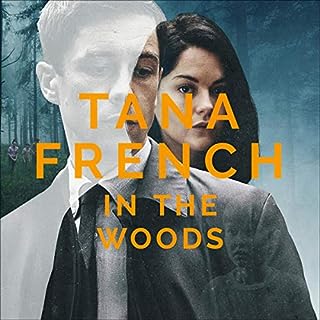 When he was 12 years old, Adam Ryan went playing in the woods one day with his two best friends. He never saw them again. Their bodies were never found, and Adam himself was discovered with his back pressed against an oak tree and his shoes filled with blood. He had no memory of what had happened. Twenty years on, Rob Ryan - the child who came back - is a detective in the Dublin police force. He's changed his name. No one knows about his past.

The plot is good with a great foundation and some interesting twists, but the characters are almost universally unattractive, and the narration is stilted and pompous. The main character Adam / Rob is an early thirties Dublin detective, but he is voiced as an elderly English bore. I found it impossible to like him and, when he addresses the reader towards the end of the book, acknowledging how dislikeable he may seem, I could only agree.

The police practices depicted in the book are a world away from how things are in reality, which irritates, and the scene with the 80s rapist-now-businessman is just plain offensive, to women, and to law enforcement. The real villain of the piece isn’t hard to spot at an early stage, despite Adam / Rob missing it altogether, which is also irritating, and the outcome, due entirely to the hopeless policing, is dissatisfying.

I persisted to the end, but only just. 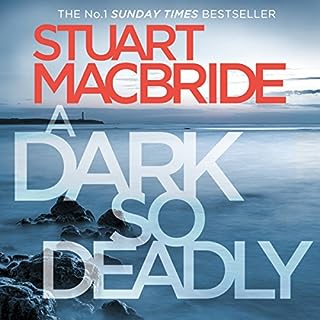 Welcome to the Misfit Mob... It's where Police Scotland dumps the officers it can't get rid of but wants to: the outcasts, the troublemakers, the compromised. Officers like DC Callum MacGregor, lumbered with all the boring go-nowhere cases. So when an ancient mummy turns up at the Oldcastle tip, it's his job to find out which museum it's been stolen from. But then Callum uncovers links between his ancient corpse and three missing young men, and life starts to get a lot more interesting.

It’s not a Logan Macrae book, but I was captivated nevertheless. The characters are people I enjoyed spending time with, the plot had me gripping the steering wheel as I drove and listened, and I didn’t see the end coming at all. Steve Worsley is his usual brilliant multiple selves. Twenty-one plus hours well spent 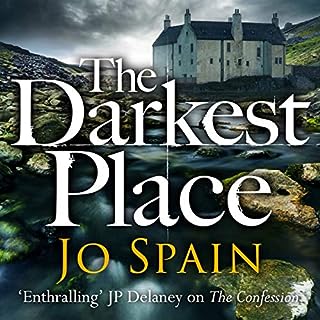 Christmas day, and DCI Tom Reynolds receives an alarming call. A mass grave has been discovered on Oileán na Caillte, the island which housed the controversial psychiatric institution St. Christina's. The hospital has been closed for decades, and onsite graves were tragically common. Reynolds thinks his adversarial boss is handing him a cold case to sideline him. But then it transpires another body has been discovered amongst the dead - one of the doctors who went missing from the hospital in mysterious circumstances 40 years ago.

This is another wonderful Jo Spain story, with a plot that really holds the attention. It’s also very revealing of the practices that endured until quite recently in “insane asylums”. Fascinating, and the end is very dramatic!

As with all of the books in this series, I really enjoyed spending time with the characters. They are well rounded and fully three dimensional; they have come to feel like people that I would like to know.

The narration is brilliant, as with all of the books in the series read by Aoife McMahon - she voices the characters and their emotions perfectly. 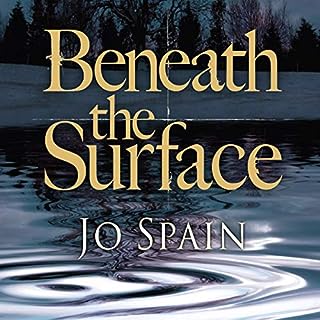 From top-10 Irish best-selling author Jo Spain comes the second novel in the Inspector Tom Reynolds series. Ryan Finnegan, a high-ranking government official, is brutally slain in Leinster House, the seat of the Irish parliament. Detective Inspector Tom Reynolds and his team are called in to uncover the truth behind the murder. As the suspects start to rack up, Tom must untangle a web of corruption, sordid secrets and sinister lies.

Don’t let the narration put you off

If you enjoyed With our Blessings you will also love this book. Inspector Tom Reynolds and his team are embroiled in the world of Irish politics with a murder in the very heart of the political world. The plot held my interest and kept me listening despite the wooden narration. The characters are as engaging as in Book 1 in the series, and we learn more about them in this book.

It’s a great story, with lots of twists and turns and so absorbing that I (mostly) forgot about the narration. 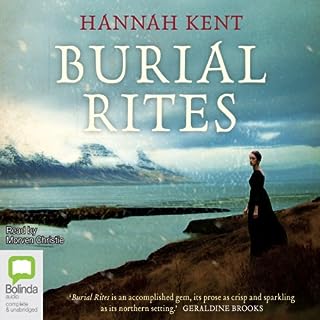 In northern Iceland, 1829, Agnes Magnúsdóttir is condemned to death for her part in the brutal murder of two men. Agnes is sent to wait out the months leading up to her execution on the farm of district officer Jón Jónsson, his wife, and their two daughters. Horrified to have a convicted murderess in their midst, the family avoid contact with Agnes. As the year progresses and the hardships of rural life force everyone to work side by side, the family’s attitude to Agnes starts to change - until one winter night.

This book is utterly brilliant. Nineteenth century Iceland is beautifully evoked, and the characters sensitively drawn. The story is completely compelling and the reader is drawn deeply into the history and fate of the main character. I bought the hard copy book immediately on finishing the audio version as it a book to return to again and again. 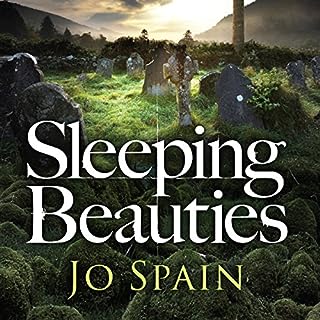 The inspector frowned and examined the earth under the trees. As he scanned the glade, his stomach lurched. One, two, three, four. Five, counting the mound of earth disturbed under the tent. Somebody had cleared the earth of its natural layer and sown their own flowers. In five places. Five graves. A young woman, Fiona Holland, has gone missing from a small Irish village. A search is mounted, but there are whispers. Fiona had a wild reputation. Was she abducted, or has she run away?

Continues the tradition of With Our Blessing

Another riveting story from Jo Spain, with the wonderful Tom Reynolds. This one explores the mind of a serial killer. Fascinating, and disturbing. The narration by Aoife McMahon is brilliant.