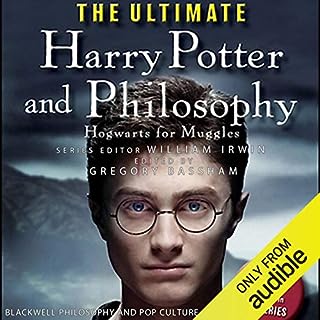 Harry Potter has been heralded as one of the most popular book series of all time and the philosophical nature of Harry, Hermione, and Ron's quest to rid the world of its ultimate evil is one of the many things that make this series special. The Ultimate Harry Potter and Philosophy covers all seven titles in J.K. Rowling's groundbreaking series and takes fans back to Godric's Hollow to discuss life after death, to consider what moral reasoning drove Harry to choose death, and to debate whether Sirius Black is a man or a dog.

Well worth my time!

Very thought provoking and entertaining. I thoroughly enjoyed listening to a well-rounded philosophical analysis of the Harry Potter series.