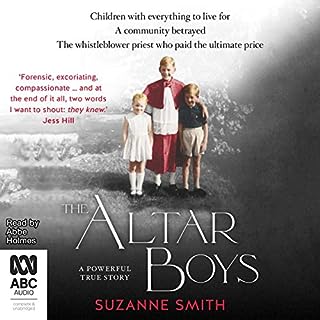 Glen Walsh and Steven Alward were childhood friends in their tight-knit working-class community in Shortland, New South Wales. Both proud altar boys at the local Catholic church, they went on to attend the city's Catholic boys' highs schools. Both did well: Steven became a journalist; Glen a priest. But when Glen discovered another priest was sexually abusing boys, he reported the offending to police. Just weeks before he was due to give evidence at a key trial against the highest cleric to ever be charged with covering up child abuse, Father Glen Walsh was dead.

Sad that it needed to be written

sadly I knew almost everyone mentioned in this book and could put names and faces to those who wished to remain anonymous.